For nearly a decade, the City of Banning had to endure the challenges brought on by six unfinished commercial buildings spread over 9 acres of land located just off the 10 Freeway. The problem wasn’t necessarily that the buildings were unfinished, but rather that the unfinished buildings had been overrun by transients and squatters taking up residency within these structures resulting in hundreds of violations of State and local laws, numerous fires, hazardous conditions, and an accumulation of garbage and debris. What was once a place of potential future economic growth and development for the City of Banning, had quickly become more than just an eyesore, but a dangerous threat to the health and welfare of the community. 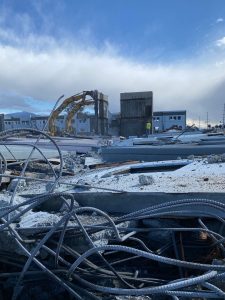 In November 2017, the Riverside County Superior Court appointed Richardson Griswold as the Court Appointed Receiver to take possession and control of the structures pursuant to the City of Banning’s petition. After obtaining multiple bids to attempt to either rehabilitate the buildings or demolish them, the Court authorized the as-is sale of the Property to a new owner who was contractually obligated to bring the buildings into compliance with the City of Banning. The property was sold and Mr. Griswold was discharged, allowing the new Property Owner to rehabilitate the property within the specified timelines agreed to with the City of Banning.

Unfortunately, this new Property Owner failed to rehabilitate the property within the specified timelines, thereby breaching the compliance agreement. This breach resulted in the City of Banning requesting that the Court reappoint Richardson Griswold to retake possession and control of the property. Following the reappointment of Mr. Griswold, in November 2019 the Riverside County Superior Court ordered the Receiver to demolish the unfinished commercial business park. In response to this Order, the Property Owner filed for Chapter 11 bankruptcy protection in order to attempt to halt the project. After months of bankruptcy litigation, the Bankruptcy Court re-affirmed the State Court's Order and directed Mr. Griswold’s team to carry out the Court-ordered duties. 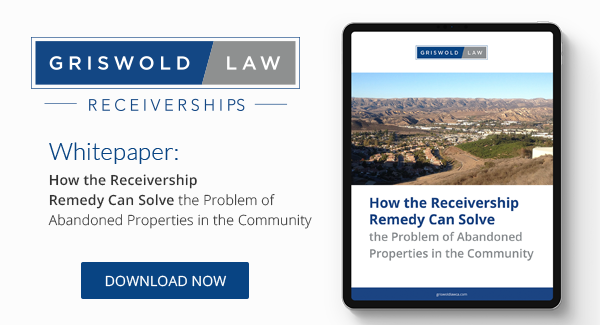 After securing approximately $1M in Court-authorized receivership funding, Mr. Griswold and his team directed the Court approved demolition contractor to begin the project. All six unfinished buildings have now been demolished and the demolition team is working on hauling away the many tons of remaining concrete and materials. What has been for years an ongoing danger to the City of Banning and the many nearby residents, is now a practically vacant lot with all violations and hazardous conditions nearly eliminated. Concrete results of another successful receivership!

A Health & Safety Receiver can provide the long-desired solution to problematic abandoned properties. Receiver Richardson “Red” Griswold has been appointed by California courts over 100 times across 13 counties to act as a Receiver for substandard properties. For more information, please contact Griswold Law Receiverships.